﻿ Iran Astrology: Sun in Ordibehesht or Taurus, Moon in Day or Capricorn 2014
Astrology

Iran Astrology: Sun in Ordibehesht or Taurus, Moon in Day or Capricorn 2014


Iran Astrology: Sun in Ordibehesht or Taurus, Moon in Day or Capricorn 2014

The Moon is in Day and 8th and 9th Houses until Monday.

The Moon in Day energy gives you luck if you have a formal and very high class attitude. You need to be very conscious of the long term social status of whatever it is you are looking at. Frivolity is out. Emotional outbursts will not buy you any favours. Be regimented and extremely disciplined. Musically think of Ode to Joy as opposed to the latest Rap. Yes it is boring to some, but the point is that it has lasted the test of time. Day energy connects us to the concept of space time. I am born in Day. So that is why I do all this. Day energy is systematic and very organized. But it will also travel in time, which makes it more exciting than some would suppose, and explain some of my perculiar thoughts. Day will give you that pompous "I is the greatest" as Mohammad Ali would say feeling. You will feel you are at the top. A very eery feeling that you know will be the end of your ascent. So it can a very sobbering time if you do not have the open mind (Bahman will do this from Monday). That is why you need to use this moment to see the end of matters that have run their course of time. No wonder that Saturn rules Day and the Christians use the The Cross as Fate. Let me ramble on this, as a lot of what you will now have thought of, will have to be unlearned.

The test of time is fundamental to Zoroastrian thought, so much that it has found its way into other thoughts, later to become "Gospel Truths". Look at Christian thoughts of the return of Christ, or the Shi'ite thoughts of "Emam Zaman", which are blatant plagiarism of Zoroastrianism. But later Zoroastrianism changed the original Iranian Astrological concepts. Zurvan or Father Time was found by British scholar RC Zaehner who was totally clueless about Astrology. His knowledge was based on what he had at his disposal, namely Biblical scriptures. He had no knowledge of the more ancient roots of all this. Or if he did, he would not divulge it, as it would certainly make a mockery of Greek, India and Chinese or any other younger civilization. Iran had to be kept down and out of the picture. So you need to become a spiritualist and use the time travelling tools that exist for those who believe in this Iranian past. Yes it is there but it is more for the ignorant as opposed to the learned. Those who have spent years memorizing the Koran, will just have to unlearn a heck of alot to accept this attitude. In the time of Monguls when a lot spiritualists like Hafez tried, but so much us Iranians, is just not there if you do not accept Astrology. Day energy will allow you to travel across time with the very secular cool calm attitude. But you need to tame your emotion and have a space time traveller's "Persepective" (pun intented). Sorry for the childish humour and ramble but that is what you get with me, especially when the Moon is where it is :)

The Moon is still in the 8th House until Sunday morning, and as you can see from above, it is a great time to look across space time. Look for what are "classical" or "timeless" concepts for whatever it is you are sharing with anyone. Think of the administration and management systems, that are to be deployed, that will survive the test of time against any form of what you deem to be disaster. Of course there is no such thing as a "disaster" because everything is a learning experience at the very least.

The Moon will move into the 9th House very early Monday. Most of us will have little time to do a lot, as it is will be in there for only eight hours as a Day energy. But it a precious moment as it allows you to look at the philosophical aspects of life from a practical yet high standard. You will be able to discern which meaniful thoughts are applicable across time.

The angles are perhaps the most interesting part of all this. It has taken a lot to get to this spot of the article and there is so much more to say. So I will make it short. You should all be well aware of the famous Salibeh Mehran or Grand Cross we have had for months. It gets triggered at around this time of the week. This time it is the alignment with Pluto by tomorrow morning, which is the one we Astrologers are mostly interested. It will bring on the Earthquakes and changes of governments. Many of the politicians at the moment are highlighted. Putin for example was born with Sun conjunct Saturn in Mehr. The Astrology of Vlamidir Putin must be a great example for all young Russian Astrologers measuring the Salibe Merhran's influence on him.  And then you have India having their election just when this alignment is taking place. They in fact did it when the Moon was opposed to Mercury. It is not going to be easy going is it. They will need to really work hard at pulling all four corners of the squares together. It will be "high emergency" all the time, and non-violence will be surely tested. Ya Ahura! 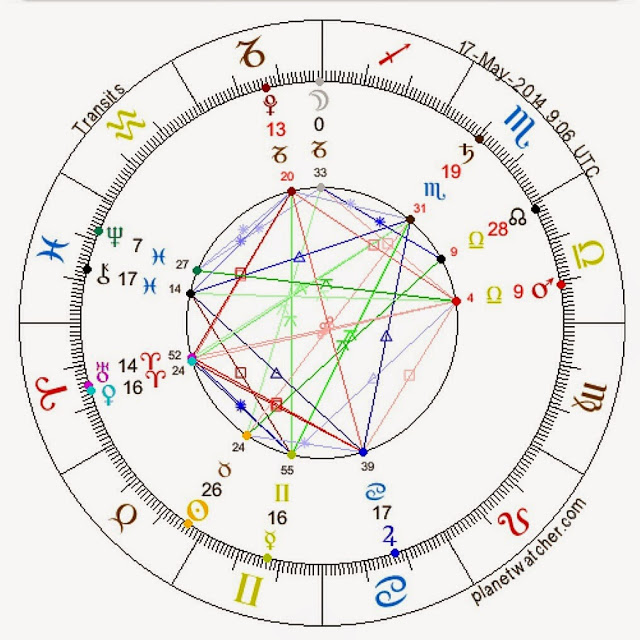