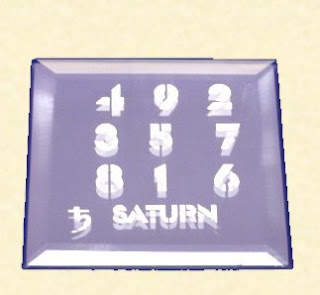 Well, I for one was not looking forward to getting up in the dark and cold at 1:20 am to make Saturn mirror talismans. I realized, however, that Saturn wouldn't appreciate being blown off and then as I started my preparations, I got more and more into the ritual and the mirrors.

Everything went very well! I used black candles, pine resin for incense and had Nigel's amazing Saturn image for invocation and consecration of the mirrors. I etched the mirrors right on time using my new precise stencil process and they came out great! Saturn Mirror

A new wrinkle to the ritual was that I played Nigel's wonderful Saturn invocation music! More on this later.

The more I work with mirrors as talismans, the more rewarding I find them. When I was a child we had a thick glass table. I used to sit and look into the edge of it. It was like peering into a deep and enigmatic blue/green ocean. Light seemed to pause and refract unexpectedly and I could see into a strange and eerie world.

I had the same feeling with these Saturn mirrors today. I was used to looking at them face on, but then I laid them on their edge and the sunlight made the etched design float on the refracted green edges, putting me in a dreamlike reverie.

Yes, the mirrors are beautiful and look great on the wall or on your altar. But working with them as doors and windows into the realms of the spirits whose tables, characters and sigils they contain is even more rewarding. I have been completely entranced and swept away with the mirrors and mirror work that I have done since beginning the creation of etched mirror talismans.

Saturn in particular promises to be particularly useful and exciting. Saturn is, par excellence, the planet of "the more occult philosophy" His sphere is the highest, he is closest to the fixed stars and to the Empyrean, the source of all knowledge and power. Saturn jealously guards his secrets, releasing them only to his acolytes, the children of Saturn. But his are the secrets of astrology, magic, sorcery and occult philosophy. To know Saturn, is to delve deeply into the hidden roots of all esoteric practice.

I am, myself, greatly looking forward to my Saturnine mirror work. I am offering just 3 Saturn mirror talismans, in a beveled 3 x 3 mirror, with the Saturn table from Agrippa's Three Books of Occult Philosophy. Saturn Mirror

They are $59.95 plus shipping and include a special Nigel Jackson Saturn image from Picatrix and consecration instructions.

But that's not all! If you order a Saturn mirror ask me and I will include a free CD sampler of Nigel's incredible Saturn invocation music composed with his wife Patti. This music is incredible, I literally got high the first time I listened to it. Now
granted I am Saturn ruled, but hey! This stuff is great! Nigel is a leading traditional ceremonial musician and this music was composed specifically for the Picatrix Saturn invocation as lyrics and to use for Saturn invocation. This is perfect for putting you in the proper frame of mind and invoking Saturn. This is a smaller CD sampler of the forthcoming full Saturn CD which will not be available till later in 2009.

I am going charge $14.95 for this CD sampler, but if you order the Saturn mirror you can have it for free!


- Reconsecration Of Afflicted Planets' Talismans?
I had a poster ask about reconsecrating a Jupiter talisman when Jupiter was in detriment, which he will be until Summer of 2013. Definitely if we are creating a talisman we want to be careful about the election. In essence we are "freezing" the moment...

- Ritual Use Of Candles & Free Beeswax Candle With Talisman Order
I just thought I would post a few thoughts regarding the ritual use of candles. Lamps, which use a fuel that is liquid at room temperature and a wick, were more prevalent in the classical period in the Mediterranean, but by the Middle Ages and Renaissance,...

- Mirror Madness #1: Moon Mirrors!
I got so caught up with Picatrix and other business that I wasn't able to give a heads up about a great Moon election yesterday, but I used it to make Moon mirrors and Wade cast Moon talismans! This was an excellent Moon election with the Moon culminating,...

- Basics Of Consecration In Astrological Magic
In life in general and in magic in particular, it is very tempting to want the "best" or the "right" way to do things. I get lots of e-mails and calls from clients that are very worried about whether they got the right shade of blue for the candles or...

- Saturn Extravaganza
I am very pleased to announce the beginning of the Saturn Extravaganza! We start with a current chart for a Saturn talisman with plenty of advance notice, in late November 2008 http://www.renaissanceastrology.com/chartweek11-24-08.html Saturn has the...