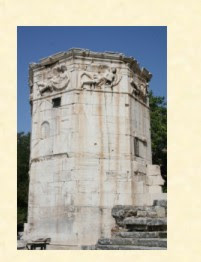 I added a new web page on the Tower of the Winds, an ancient building in Athens.

The standard modern view is that it was "scientific" you know a big utilitarian clock tower.

We tend to think of talismans as jewelry, as rings or medallions. In fact, De Imaginibus of Thabit Ibn Qurra clearly is talking about statuettes and many of the Picatrix Bk IV chapter 9 mansions images are also to be made as statuettes, often of wax. Certainly magic mirrors and swords, for example, are part of our traditional view of talismans, but almost anything, up to a whole city, can be created as an astrological talisman. These forces permeate all material things and if we pay attention orient us to the spiritual cycles and forces that underlie everything in the material world.

- Wearing Or Hiding Astrological Talismans?
I had a recent question asking whether you could openly wear astrological talismans or should hide them. If there is any mention of this issue at all in Picatrix it does tend toward hiding talismans. Picatrix Bk I, ch 5, Greer & Warnock trans, page 42,...

- Astrology & Spiritual Alignment
I was recently asked about how one would time an astrological painting. The question appeared to be a reference to Marsilio Ficino's discussion of creating an image of the Cosmos or universal image in Three Books on Life, Bk III, ch 19. This image,...