Ceto ("sea monster") is a primordial sea goddess in Greek mythology, the daughter of Gaia and Pontus. As a mythological figure, she is most notable for bearing by her husband Phorcys a host of monstrous children, collectively known as the Phorcydes. She was the personification of the dangers of the sea, unknown terrors and bizarre creatures. Phorcys is represented with a man's head, crab's claws and a fish tail. 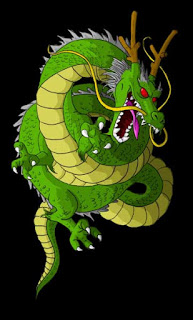 In the manga-anime "Dragon Ball" (1986), when the seven dragon balls are reunited, they begin to sparkle and the dragon Shenron can be invoked, which allows to ask for a desire, that once conceded, the balls are again scattered around the world.

In the movie "Labyrinth" (1986), the adolescent Sarah (Jennyfer Connelly) wants her babybrother be taken by the King of the Goblins (David Bowie), but when he really disappears, she suffers a strong repelence and cames into the Labyrinth to find back her babybrother.