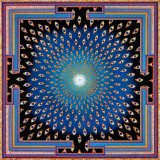 Archetypal astrology is another name for Jungian astrology, a ?creature? that Carl Jung never invented, but a name that astrologers like myself use to describe the way we work with the symbolic language of astrology. Archetypal astrology is a movement away from quick predictive astrological answers and a continual calling to track the movement of the Soul through time. It?s a blend of the best of both worlds, and an attempt to move away from the worst of each.

By honoring the planetary symbols we honor the gods and goddesses within us, and we can call these parts of our inner psyche by whatever name we choose?planet or mythological symbol?but we?re still following the same gods home. Astrology?s foundation is in mythology and psychological observation, and Jungian psychology is grounded in symbolic mythological thinking. The conflict or difference between the two appears to be mostly a matter of language, style and respectability.

Astrology has had a bad reputation throughout history because of its connection with fortune telling, and it is because of this taboo quality that most Jungians have chosen to focus on astrology?s sister: alchemy. Although alchemy is rooted in astrological thinking, it doesn?t carry the taboo and therefore can be presented in more respectable circles. Jung was warned by his colleagues to not venture forth into the world of astrology and mysticism or he would risk his credibility. So he astutely chose to examine the symbolism of the unconscious through the avenues of dreams, myths, and alchemy.

Archetypal astrologers, evolutionary astrologers, and Jungian astrologers are all delving deeply into the inner world of archetypal symbolic images?to the Soul. This is the language we all use no matter what we call ourselves. There are many paths to the Soul and to self-knowledge, and the simple advantage of astrology is the speed at which we can learn about ourselves---if we are open to hearing. That?s the catch. Astrology can open insightful doors quickly but most of us are not able to hear. Jungians would say that we have this ?resistance? to hearing as an egoic self-defense, and theories abound about the rightness of this resistance. That?s probably why most astrologers have a certain blindness about their own charts?.we can see our client?s complexes and t-squares but not our own. Well, granted we do see them, but how much do we really allow ourselves to know about our own shadow qualities? It?s not an easy quick process.

The combination of astrological insight and the slower process of Jungian counseling together allows for one to open up to insights at the right time and in a context of the safe ?container? of the therapeutic relationship. Astrology may be too quick, and Jungians may be too slow (they can hold their client?s hearts forever!) but the combination of the two?what is called archetypal astrology?might just be the very best form of counseling and soul work. ~elizabeth spring


- Mirroring: That Which Is Above To That Which Is Below
Dear Kendra~ I wish I could be like mythogical Merlin here, magically bestowing answers and comfort, but instead, you have me, your friend and mentor, who is more humbly "a reluctant astrologer." If I were him, I would be sharing with you how the Soul...

- Mandala Of The Birth Chart
There?s a mystery in a mandala, and a mystery in an astrological chart. They look similar with their circles, lines, and squares but I wouldn?t want to try to encapsulate it by reason, but rather to draw attention to the spiritual mystery within...

- Archetypal "jungian" Astrology
"Astrology represents the summation of all the psychological knowledge of antiquity." C.G. Jung "We often believe our true Self is housed in our personal myth--in the story of our lives. I think that's a mistake; especially when...

- Jung And Astrology
"Astrology represents the summation of all the psychological knowledge of antiquity." C. G. Jung We often believe our true Self is housed in our personal myth; in the story of our lives. I think that's a mistake. I believe we're larger than...