Ancient Astrologers always valued the time when Monarchy changed in a country. This could be whether he or she was alive or from death.

On this day in 1980, the Shah of Iran, Mohammad Reza Pahlavi passed away. I have produced the chart for Noon GMT for that day. This day is very dear to all Iranians who are over thirty or born in the 70's. Most have witnessed big emotion in themselves or indirectly via their parents.

You can see right away that the Moon was changing from Day or Capricorn to Bahman. That is why I have asked the Crown Prince to supply me the exact time and place when his Imperial Majesty passed away. Please let me know if you are certain.

This then is the Horoscope of Iran. I will take it seriously because the Moon reflects the inherited situation. And the Moon in Bahman fits perfectly with the beginning of the Islamic Republic in late Day and early Bahman 1979.

That is why I think this is the more inclusive chart than other ones based on other times. I quite like the Uranus in Scorpio rising. It ties in all the revolutionary zeal and with Pluto being the ruler and its association with nuclear endeavours.

Every year I look at the position of the planets for this day because it will show whether any major changes are due. This year we have the New Moon and Jupiter conjunct the Sun. That is a great omen. It signifies a brand new cycle for Iran.

We also have Mars in Aban and now in the 1st House, which will provide lots of energy for people to seek self-determination. No more of the 12th House self undoing that has forced us all to reflect so much for so long. No more brooding. It is time to get up and go forth with a lot of confidence.

Finally Saturn will pass over the Uranus in the chart and that can only be good in putting a damper and some order in the revolutionary zeal in Iran. Harmonious order will prevail. Obviously with the natal Jupiter and Saturn in Shahrivar in the 11th,  the rather pedantic, regimented political system will prevail.

There is a lot more to be said. 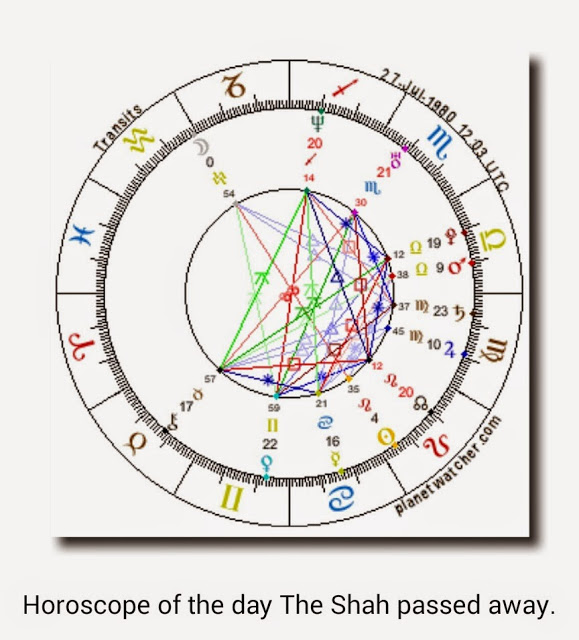 - Astrology Of Iran's Last King
Below are the positions of the planets and moon for the day Mohammad Reza Pahlavi decided to crown himself. We all know what happened to him. Planet Longitude Latitude Right Asc. Declination Sun 01 Sco 52'47" 0°00'01" 13:58:50...

- Reuter's Paul Hughes Learns From Khomeini
Isn't it ironical that Reuters still believes what Khomeini said, that Iran was ruled by the U.S.-backed Shah. With one little phrase like that, over 7000 years of Iranian Kingship heritage is literally discredited. So any country in the world that...