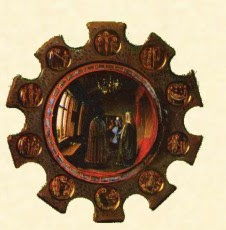 I had a poster ask me about using or wearing multiple talismans. A very good question and one that comes up frequently. We don't have any guidance in our traditional sources on astrological talismans with regard to the interaction of multiple talismans.

This is my take, based on my personal experience and personal logic. I used to be worried about combining talismans of planets that were inimical to each other. There are variant traditional lists of which planets are friends with each other and enemies to each other.

However, I personally wear a Saturn ring on my right hand and Sun ring on my left with other pendants, at the moment a Jupiter in Pisces, plus Regulus and Alkaid. I have never noticed any interaction problems.

I have three altars, a planetary altar, Mansions of the Moon altar and fixed stars altar. I have lots of different astrological talismans and mirrors on these altars and again, seemingly no interaction problems.

These talismans are the ensouled spirits of the planets, fixed stars or Mansions, respect and honor them and you are fine!

This is not to say that there might not be situations where there are negative interactions, but I have not personally experienced this given the parameters I have laid out above.

Note that this "getting along" is just among astrological spirits, not any and all magical talismans of whatever source or power and certainly not of non-astrological spirits. Different spirits, be they Goetic or from a different tradition, like Santeria, are a whole different story and should not be mixed willy nilly. Similarly, I would not be shocked if others had astrological talismans interaction problems, but so far I haven't and haven't had specific instances reported to me.


- Procyon Consecration Election & Usno Page
Folks, I was really surprised by the strong positive response to the new Procyon/Jupiter double talismansNote the image of a frizzly rooster! We've shipped the new talismans and many will have already received them. Since this is both a Jupiter and...

- Reconsecration Of Afflicted Planets' Talismans?
I had a poster ask about reconsecrating a Jupiter talisman when Jupiter was in detriment, which he will be until Summer of 2013. Definitely if we are creating a talisman we want to be careful about the election. In essence we are "freezing" the moment...

- Algol: Respect The Sources & The Spirits!
I had a post on my discussion group from a poster who had created an Algol talisman during what they called an "Algol transit" and then had left the talisman in a particular spot, rather than keeping it with them. They then suffered a rather spectacular...

- Deneb Algedi Mirrors & Talismans
I was very pleased with our recent Deneb Algedi election! I had my best mirror etching yet, thanks to help from my wife Kathleen, with the stencil cutting. I got a real sense of peace and contentment from doing this election. We had a lot of participation...