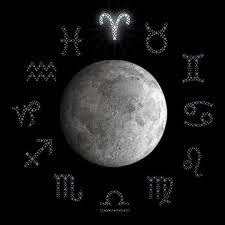 When a person has their Moon in Aries, their feelings have a certain explosive quality. Emotions cannot be kept in for long, as they are bound to simply burst right out of them, much sooner than later. These people don't like suppressing any sort of feelings, often not either dwelling on or caring much how their emotional expressions will be received. It's all put right out there, on the surface. But, emotions will also be moved on from quickly. Aries Moon burns through their feelings and have such abruptly changing moods at times that they often come off as testy or temperamental.

Action is their most natural, instinctive way of operating through life. Aries Moon males and females aren't going to just sit around and wait for things to happen. In fact, waiting is something that can definitely trip them up and tie them up in knots, resulting in one of those legendary temper tantrums. Waiting feels as if it's interrupting their very flow, as it slows them down and makes things come to a halt. Any sort of strenuous, sweat-inducing activity, like exercise or sports or dance, will be second nature to them, as it keeps them moving and allows them to burn off excess amounts of energy.

They are most comfortable when they are left to operate as independently as possible. Again, being slowed down is anathema to them and the interference of others can be seen as an unwelcome interruption. Any sort of competitive atmosphere is another comfort zone for Aries Moon, as they fully relish the feeling of coming out on top and being the best. Competition invigorates them, instead of intimidating or offending like it can with some of the other Moons. They are at ease with the good fight, but it might be difficult for them to realize just when the fight should end.

Since they are so self-reliant, they often expect the same from others. This is why caregiving doesn't come too naturally or effortlessly to most Moon in Aries people. They've got their own problems to deal with and don't need to be weighed down by the concerns of others. This may make them come off as selfish, but it's not to suggest that they don't care about others. Their way of caring is just not coddling. Aries Moon will give a loved one a good, hearty kick on the rear end, encouraging them to get back out there and fight whenever they're faced with obstacles.

Parenting isn't usually high on the list for these men and women, for the abovementioned reasons. If they do become parents, they will certainly instill independence and self-sufficiency in their children. They might be a little too rough or tough with them, at times, coming off a bit like a drill sergeant in their demands. And they can easily lose their patience with tearfests and whining. Yet, they encourage their kids to be the best that they can be. Their children's ambitions will be promoted, to the point where these parents might make no mountain seem too high. At their best, they can make their kids feel like they can conquer the world.


- Moon In Taurus
Taurus Moon males and females have a level-headed approach to handling their emotions. These people can experience strong feelings, yet they instinctively know how to get themselves back to a place of calm and centeredness. Emotionally charged situations...

- Moon In Libra
Libra Moon constantly refines and modifies their emotions. It's their instinctive nature to not automatically react, but to weigh their responses to a situation based on how someone else is or might be feeling about it. Then, they will express their...