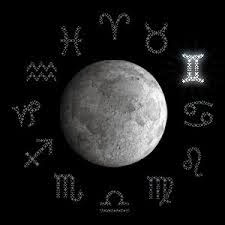 Moon in Gemini's emotions have a quicksilver nature to them. They are ever-changing, taking them through a wide range of emotional responses within a very short period of time. This sort of emotional unpredictability can be startling and confusing, to others as well as to the Gemini Moon. With their active intellects, they are always thinking and always processing things. Thus, they are constantly reasoning out their feelings. But, because they're so open-minded, they are capable of seeing one situation several different ways emotionally, switching from one stance to the next.

However they're feeling at a certain time, people with their Moon in Gemini will be very eager to communicate it. They naturally flow through life via their sense of communication. People who are too taciturn or reserved can easily make them uncomfortable, as they don't know what to do when there's not a steady flow of dialogue between others. Many of them can be extremely talkative, actually, especially when they get going. They like constantly ping-ponging back and forth between various topics, ideas, and activities, in a way that might seem sort of attention-deficit to others.

But, this mode is where they're most comfortable. People with this position need a constant whirlwind of activity and information around them. The Internet Age was made for them, as they are always striving to feed their brains somehow. However, Gemini Moon males and females usually specialize in breadth not depth, taking a lot of things in but rarely sticking too intensely to one thing. Few people can multitask like them, however, and they can be truly in their element at a party. They enjoy spreading themselves around and are insatiably interested in what's going on with everyone.

Humorous and light-hearted, these aren't the kinds of people who like to go too deeply into their feelings or other people's. Therefore, they can be sort of evasive when it comes to caregiving, not wanting someone to suck them too heavily into their problems. However, they do display an avidness toward talking about feelings. Many of them do so constantly and want others to feel like they can come to them about anything. Their quick-wit adds levity to others' issues. Feelings are treated like a breeze in the wind to Gemini Moon women and men and they help others lighten up about things.

Children with a Moon in Gemini parent are bound to have an interesting upbringing. These mothers and fathers can be sort of volatile or erratic sometimes, as their fleeting fancies and lightning-quick moods can regularly turn the house upside down. However, these kids will rarely ever be bored. Gemini Moon parents can provide lots of stimulation and fun for their children. They will be adamant about their schoolwork, seeing their intellectual development as highly important. At times, they may come off as more like an older sibling than a parent, especially since they're so willing to have an open relationship with their kids. But, this attitude is often the beginning of a lifelong friendship.


- Moon-mercury Aspects: The Gift Of Gab
If you have your Moon sign conjunct, square, opposite, sextile, or trine your Mercury, then you were born with the gift of gab. Mercury rules communication and the Moon functions instinctively. This means that you have a very natural ability to verbalize...