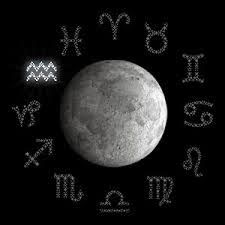 An emotionally detached approach defines the inner motivations of an Aquarius Moon individual. There's a definite distance from their feelings, allowing them to be able to approach emotional situations with logic and impersonalism. They don't get swept up in passion and don't appreciate any sort of emotional bias. In any charged situation, they're more concerned with how it effects everyone involved, instead of themselves or just one person. Although interested in the feelings of others, it's in a sort of scientific way that keeps them from getting too heavily involved.

People matter tremendously to Moon in Aquarius women and men and they flow through life in a way that is based on groups and collectives. They find it totally natural to establish various friendships with people from all walks of life. It often seems as if they are making friends wherever they go. Aquarius Moon can feel logjammed, however, when they are forced to spend too much personal time with just one person. It's never just about one person to them. It's about everyone. So, when others get a bit too close for their comfort, a certain emotional aloofness can kick in.

They are capable of having close relationships. But, it's just important that the other person knows how to recognize their personal space. Having this space is how Moon in Aquarius males and females feel most at ease. As sociable and popular as they can be, they do have a lone-wolf sort of spirit. Maintaining this independence is very important. They also need the freedom to simply be, as they do have an eccentric, quirky streak about them. But, others cannot try to tame this side of themselves. It'll make them feel deeply uncomfortable and their willfulness will cause them to fight back.

Aquarius Moon can actually be quite compassionate, but not necessarily in the typical way that we think of compassion. They aren't exactly going to be comfortable with you crying on their shoulder. However, they will always be willing to listen to your emotional problems and will usually do so without judging. In fact, the crazier someone's issues are, the more those with this position are likely to be interested. And they remain quite unfazed. Everyone has quirks and neuroses, they feel, and few people can make someone else feel free enough to let all of that out quite like them.

Having children is usually not a big priority for those with their Moon in Aquarius. In fact, the whole idea of parenthood can be a rather odd, foreign concept, especially as they tend to see it as a real hindrance on their beloved freedom. If they do end up having kids, they will need just as much space from them as they need from others. At times, the children might feel like they're raising themselves. But, this is what makes them unique and often great parents, as they truly give their offspring the freedom to be themselves. The last thing they want to do is to repress their individuality and they'll end up raising strong-minded kids with the ability to think for themselves and then some.


- Moon In Gemini
Moon in Gemini's emotions have a quicksilver nature to them. They are ever-changing, taking them through a wide range of emotional responses within a very short period of time. This sort of emotional unpredictability can be startling and confusing,...